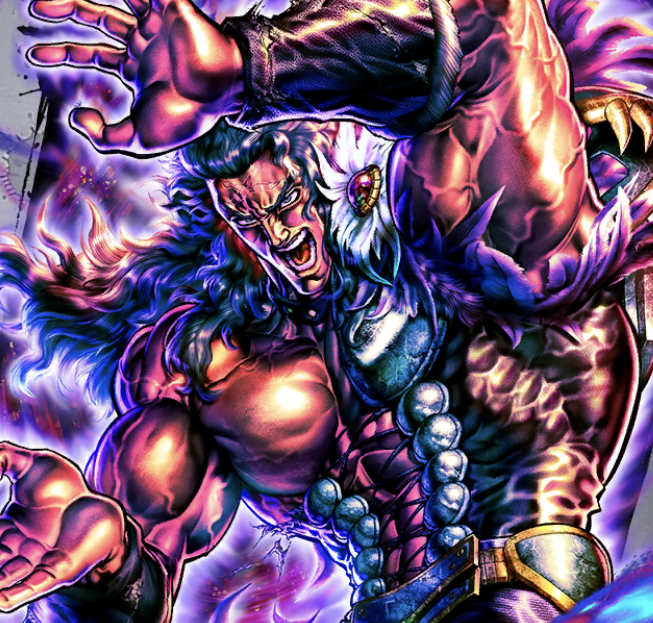 Fighter Information
In the heat of battle against Kenshiro, the aura of the weeping grief-stricken God of War emerges from Hyoh's body, erasing all traces of demonic chi and awakening the blood of the Hokuto Clan Main Lineage within him. In that moment, Hyoh comes to realize that Kaioh was the perpetrator who sealed his memories away. To atone for his sins, Hyoh uses the full force of the fist of the Hokuto Clan Main Lineage against his younger brother Kenshiro, fully prepared to die by his hands.
Special Technique: Agitated Scouring Light Palm
A terrifying Hokuto Clan Main Lineage technique where Hyoh weaves his hands like a snake preparing to pounce on its prey. In the blink of an eye, he lunges at his opponent with such immense force that his opponent is left with a deadly gash even without making contact.
Secret Technique: Ten-Thousand Handed Demonic Chime Fist
A Hokuto Clan Main Lineage Secret Technique where upon awakening the blood of the Hokuto Clan Main Lineage, Hyoh unleashes the full power of his chi and beats down his opponent with innumerable blows.
Please check the in-game description for more details on Blood of Hokuto Hyoh's abilities.
Warnings
* You can check the drop rates and contents of the Gacha in Drop Rates on the Gacha screen.
* You can check the Bonus Slot pull rate on the Bonus tab in Drop Rates on the Gacha screen.
* If the Event Gacha is not displayed at the scheduled time, please restart the app.
* The contents of the Event Gacha are subject to change without notice.
Thank you for playing FIST OF THE NORTH STAR: LEGENDS ReVIVE.
To News List