We hope you are enjoying playing FIST OF THE NORTH STAR: LEGENDS ReVIVE.
Bloodlust Han returns!
Event Gacha: 3rd Anniv. Appreciation Festival Part 2 is underway
There is now a 50.4% chance for an Upgrade Crystal to drop from a regular slot! What's more, there's a 12% chance for an Extra Large EXP Badge or Extra Large EXP Trophy to drop!
The bonus slot, which has a certain chance of appearing, features UR Bloodlust Han, and there's even a chance of pulling him at 5 stars.
* Aside from UR Bloodlust Han, all Fighters in the lineup are only available at 4-star Fighters.
Don't miss out on this boosted chance to get Upgrade Crystals which can be used for Equipment, unlocking Channeling Points, and more! 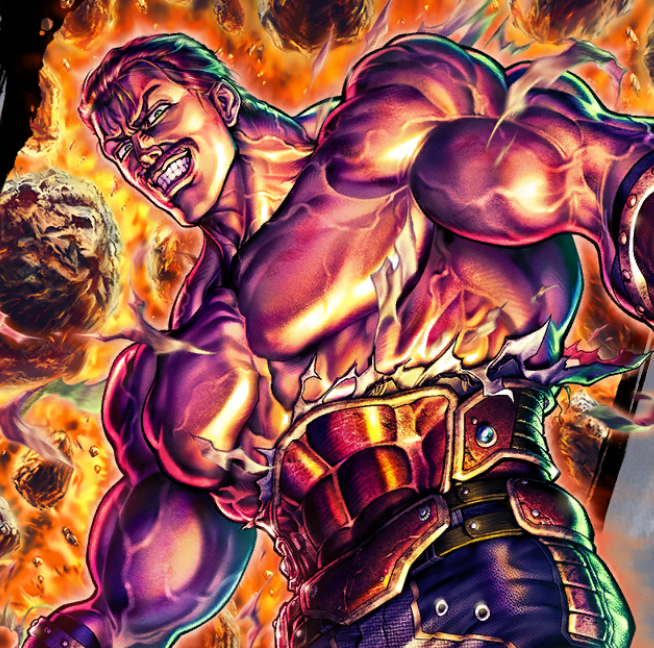 Fighter Information
Unafraid, even thrilled to risk life and limb to satisfy his lust for combat, the battle-hungry Han sends chills down the spine of his next opponent. With a fist that's as strong and fast as a hurricane, the revered Shura General devours the hopes of countless Shura in battle. His game of bloodshed is just beginning.
Special Technique: Hurricane Shadow Strike
With the force of a hurricane, Han leaps over his opponent with his incredible strength, striking them repeatedly at such a tremendous speed that his opponent can't even see the shadow of his fists.
Secret Technique: Rapid Fire Twinkling Position
As strong as a hurricane, Han bombards his opponent with a series of blows, springing into the air while his opponent struggles to catch their breath. Then, he winds them with a heavy-duty dropkick.
Please check the in-game description for more details on Bloodlust Han's abilities.
Warnings
* You can check the drop rates and contents of the Gacha in Drop Rates on the Gacha screen.
* You can check the Bonus Slot pull rate on the Bonus tab in Drop Rates on the Gacha screen.
* If the Event Gacha is not displayed at the scheduled time, please restart the app.
* The contents of the Event Gacha are subject to change without notice.
Thank you for playing FIST OF THE NORTH STAR: LEGENDS ReVIVE.
To News List