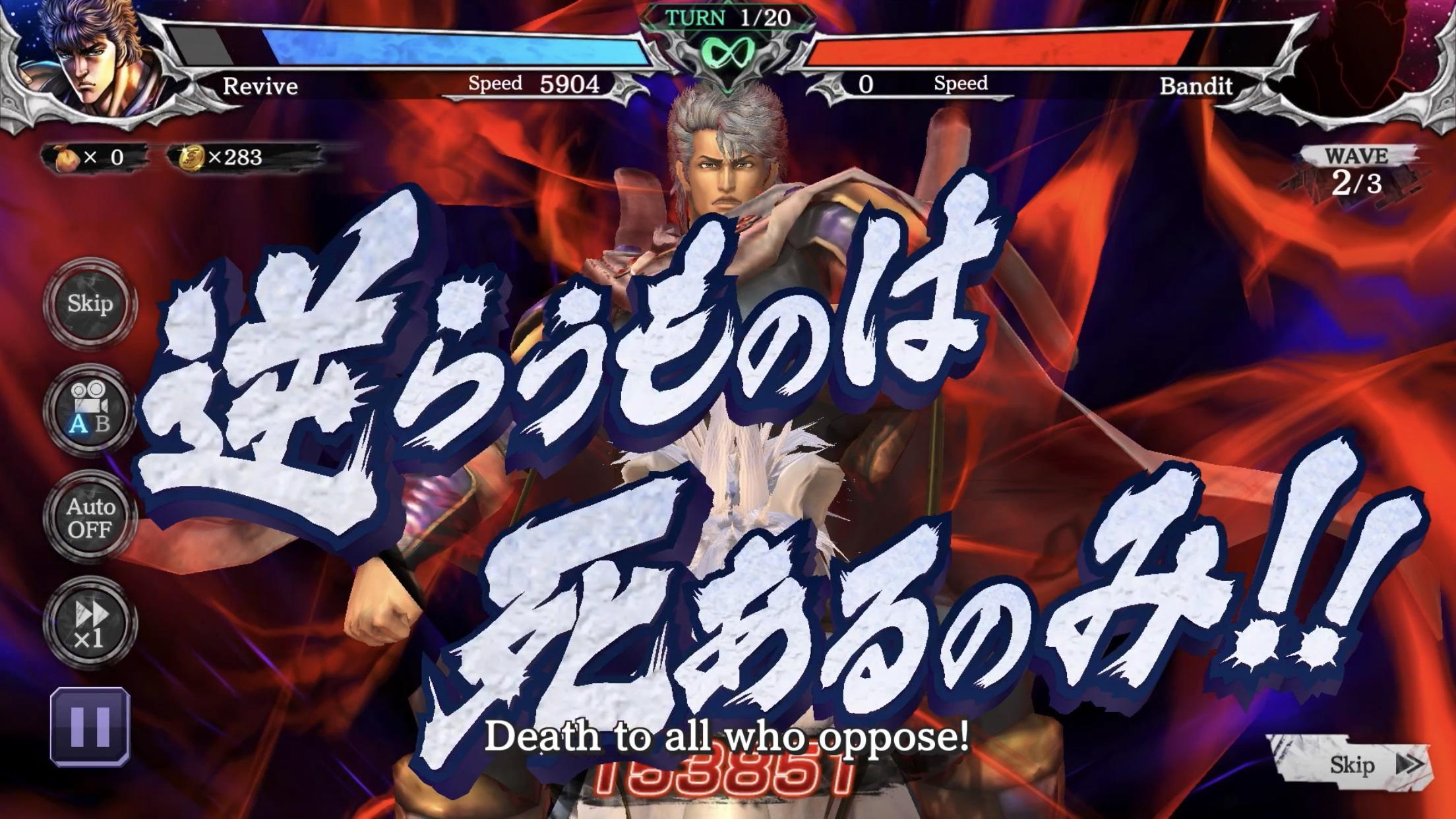 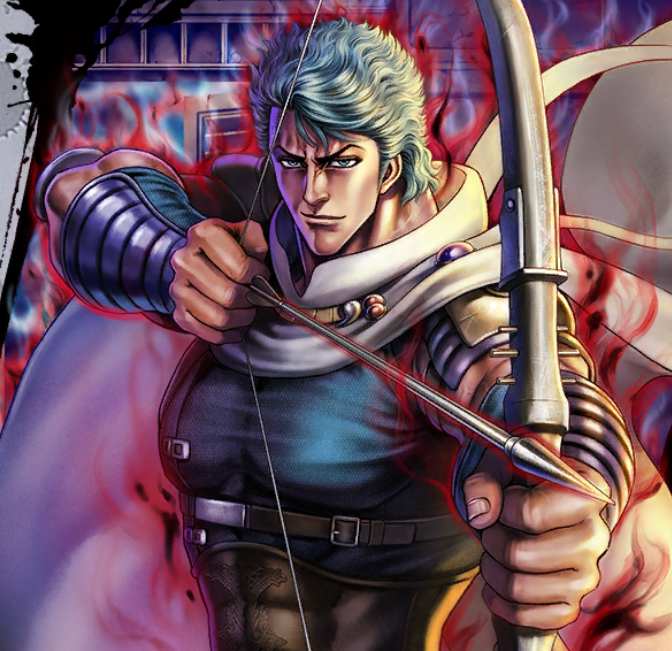 Fighter Information
Believing that the post-apocalyptic world needed to be ruled by a great tree of power, Ryuga transformed into a ferocious wolf soaked in the blood of his victims of his massacre. His search for peace led him down a route of insanity as he yearned to secure the future of the next age. Facing death head on, he challenged Kenshiro after inflicting a fatal wound to himself.
Special Technique: Burden of the Ferocious Wolf
After striking his opponent with an arrow engulfed in Chi, he swiftly closes the distance between them, striking them with a powerful blow that launches them into the air and piercing right through them.
Secret Technique: Death to all who oppose!
Straddling his beloved horse, he strikes his spear into his opponent. His sinister Chi flares up as he proceeds to dice up his target. He finishes the job by jumping off his horse and charging into them.
Abilities
Ferocious Wolf Ryuga has a chance to inflict the stackable debuff Demonic Frost onto his opponent with his Secret and Special Techniques, immobilizing them!
His Special Technique prioritizes enemies already inflicted with Demonic Frost and has an 80% chance of inflicting them with 1 Level of Demonic Frost!
Furthermore, if his HP is 70% or less, he has an 80% chance of inflicting another Level of Demonic Frost onto the target. If his HP is 40% or less, he has an 80% chance of inflicting yet another Level of Demonic Frost onto them!
Furthermore, he deals Additional Damage to the target equal to 20% of his lost HP and increases his Chi by 200.
His Unique Passive grants him the ability to remain on the field with 1 HP when dealt a finishing blow, enabling him to maintain his low HP level while unleashing powerful effects!
In addition, at the start of his turn, he inflicts HP Block on himself of an amount equal to 10% of Max HP, meaning that the longer the battle draws on, the easier it is to inflict opponents with Demonic Frost using his Special Technique!
He also inflicts Agro on a random enemy Fighter on the Front Row at the start of his turn until the 5th turn.
Upon joining battle, he gains a Shield of an amount equal to 50% of his Max HP, enabling him to remain on the field even when his HP is reduced.
When he unleashes his Secret Technique, he inflicts 1 Level of Demonic Frost onto his target and increases his Chi by 200! (This effect can activate up to once per turn.)
Ferocious Wolf Ryuga is capable of inflicting a stackable debuff that immobilizes his target. In addition, his unique offensive debuff makes his Special Technique stronger the lower his current HP is!
*Demonic Frost: For 1 turn, immobilizes the target and reduces their Additional Damage Reduction by 10%. Stackable. Decreases by only 1 Level when Debuffs are removed.
*HP Block: Reduces the Max HP of the inflicted Fighter. HP Block can have a max value of up to 99%. If a Fighter inflicted with HP Block is inflicted with another effect that affects the their max/min HP, the value of the HP Block is not affected. Even if inflicted with an effect which affects a Fighter's min/max HP, any HP Block value that exceeds 99% is ignored. (Continuous, stackable and cannot be removed. Continues after being revived.)
*Agro (Forces the afflicted Fighter to target the Fighter that inflicted them with Agro using either their normal attack, Special Technique or Secret Technique, for 1 turn. This effect also applies to attacks that have priority. Damage from Fighters with Agro is reduced by 50%. Additional damage from Fighters with Agro is reduced by 30%.)
Please check the in-game description for more details on Ferocious Wolf Ryuga's abilities.
Warnings
* You can check the drop rates and contents of the Gacha in Drop Rates on the Gacha screen.
* You can check the Bonus Slot pull rate on the Bonus tab in Drop Rates on the Gacha screen.
* If the Event Gacha is not displayed at the scheduled time, please restart the app.
* The contents of the Event Gacha are subject to change without notice.
Thank you for playing FIST OF THE NORTH STAR: LEGENDS ReVIVE.
To News List