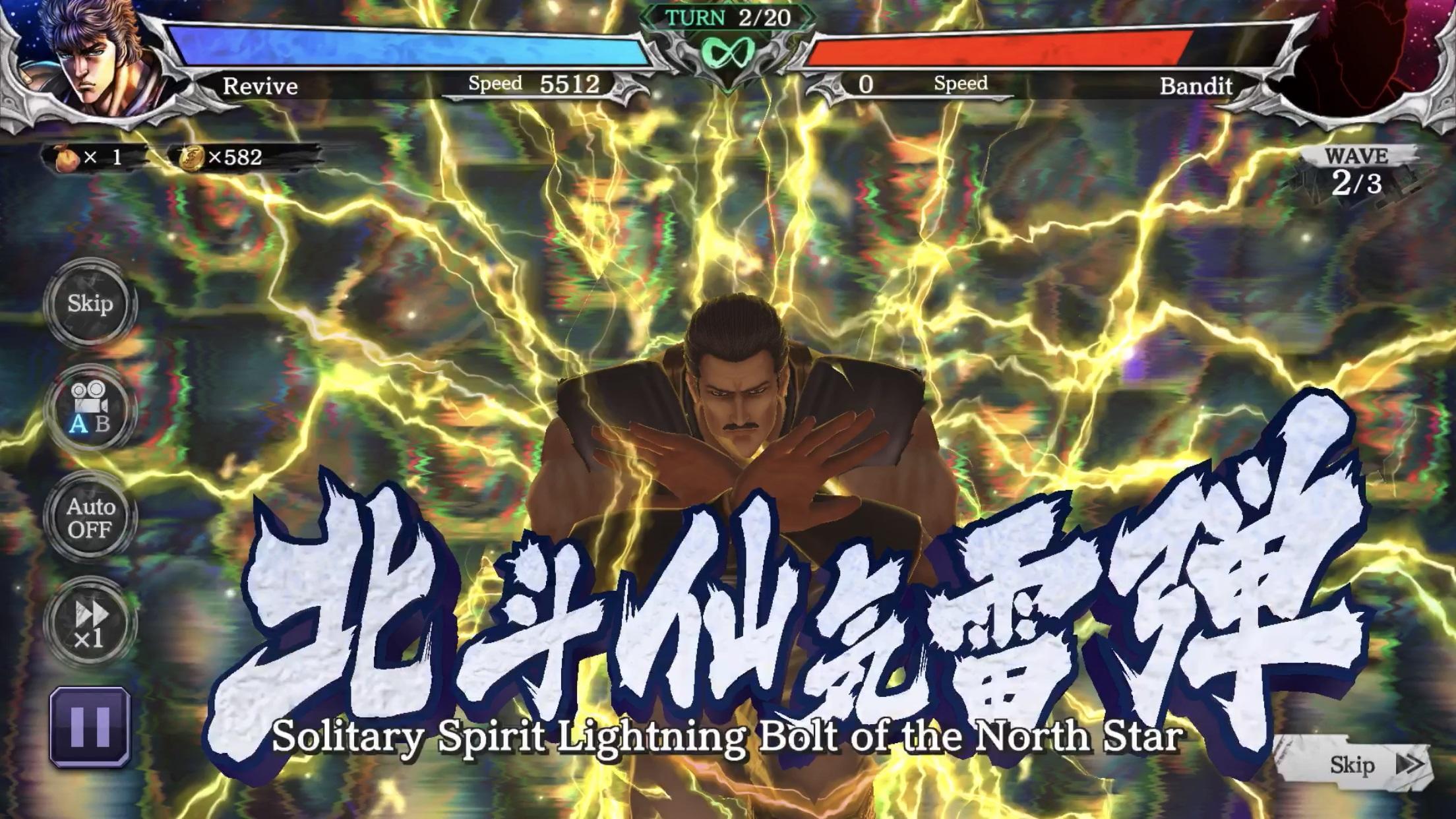 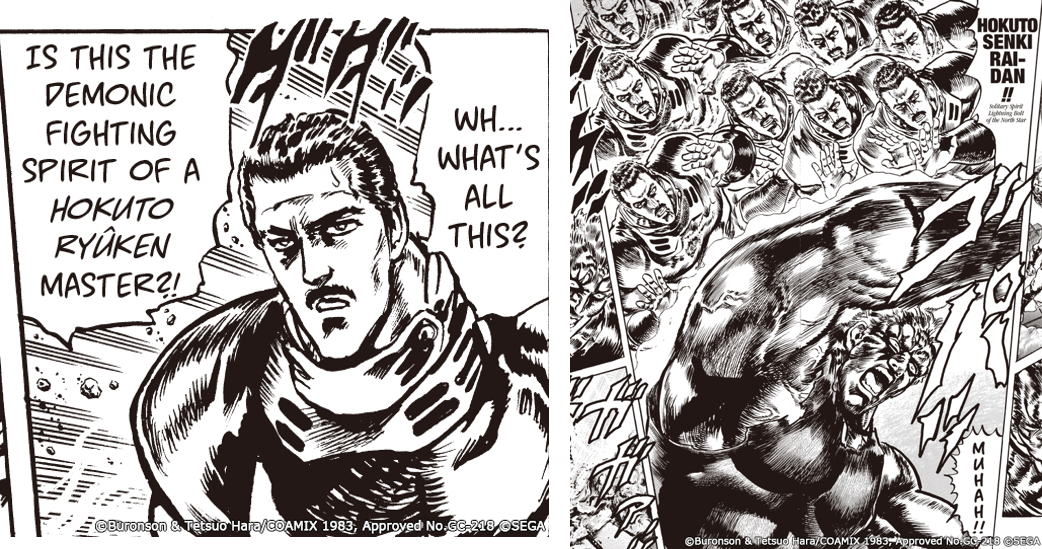 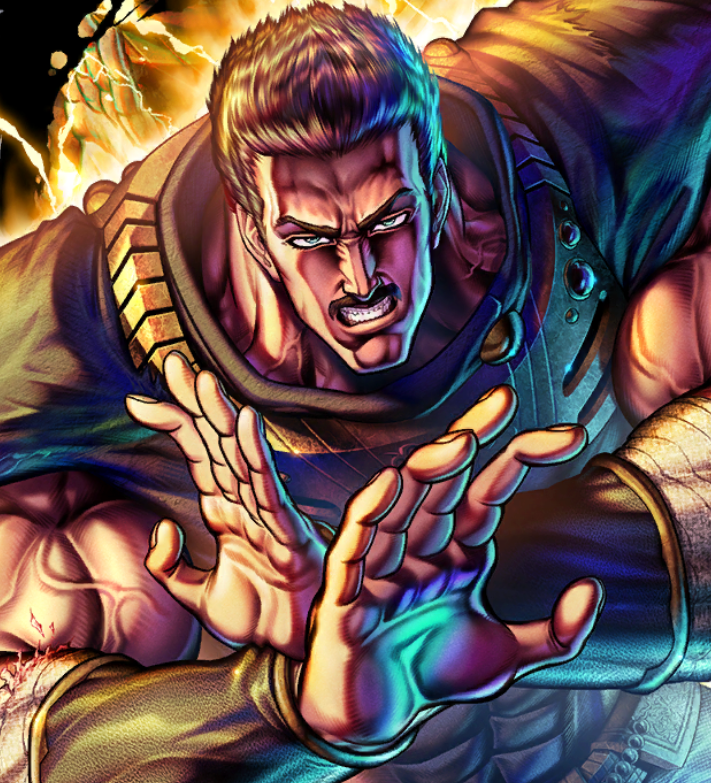 Profile
Master of the Four Brothers of Hokuto and the previous successor of the Hokuto Shinken style. He honed his skills as the 63rd successor in the Land of Shura. In his younger days, he faced off against the young Jukei, who had succumbed to the demonic power of Hokuto Ryuken, and was pushed to the limits of human endurance, but later managed to regain his humanity.
Special Technique: Hokuto Flash
A technique where he draws a gold circle, dazzling his opponent. His hands fill with Chi that sparks like lightning. While his opponent is caught off guard, he strikes them with the palms of his hands.
Secret Technique: Solitary Spirit Lightning Bolt of the North Star
A Hokuto Shinken Secret Technique where he soars high above his opponent's head. Numerous illusions of him suddenly appear, confusing his opponent. While his opponent is distracted, he positions himself behind them, striking a channeling point at the back of their neck.
Abilities
The 63rd Successor of Hokuto Shinken Ryuken's Secret Technique enables him to inflict Demonic Seal onto his opponent, reducing their Chi Increase by 100% for 1 turn!
His Secret Technique also deals damage to an enemy Fighter in the Back Row at random. Guard and Skill Guard are ineffective against this attack. He also reduces the target's Chi by 300 and inflicts Demonic Seal on them!
If he can activate his Secret Technique before his opponents, he can hinder them from activating their Secret Techniques on their turn!
If his Secret Technique is Upgraded, he increases his Chi and the Chi of all allied Hokuto Fighters! (This effect can activate once per turn.)
If his Special Technique is activated, he prioritizes the enemy Fighter inflicted with Demonic Seal and inflicts Silence onto his target for 1 turn if they have been inflicted with Demonic Seal.
Furthermore, he gains 1 Level of Wall (Max 5 Levels). He also increases his Chi by 250, making it possible for him to hinder his target from activating their Secret Technique while making it easier to activate his own!
His Unique Passive activates during battle, increasing the Secret Tech. Dmg Increase of ally Fighters. This effect is doubled for Hokuto Fighters including himself!
When an enemy Fighter deals a finishing blow to him, his HP falls to 1 and he stays on the field. (This effect can activate once per battle.)
Furthermore, he reduces the Chi of the enemy Fighter with the highest Chi by 300.
The 63rd Successor of Hokuto Shinken Ryuken has a number of abilities that hinder his opponent's ability to activate their Secret Technique, such as Demonic Seal which reduces the affected enemy Fighter's Chi Increase by 100% and Chi Reduction. Coupled with his ability to gain Wall and still remain on the field after being dealt a finishing blow, he's a Fighter that excels at debuffing his opponents as well as defending!
*Demonic Seal: Reduces the target's Chi Increase by 100% and their Secret Tech. Dmg Reduction and Special Tech. Dmg Reduction by 20%. Cannot be removed.
*Silence: Inflicted target cannot activate their Secret Technique for 1 turn.
*Wall: Reduces Damage Received including Additional Damage by 70%. This does not include continuous damage or damage from Damage Reflection. 1 Level of Wall is then removed. If this effect has been granted multiple times of varying amounts, defaults to the first effect granted. Max of 5 Levels.
Please check the in-game description for more details on The 63rd Successor of Hokuto Shinken Ryuken's abilities.
Warnings
* You can check the drop rates and contents of the Gacha in Drop Rates on the Gacha screen.
* You can check the Bonus Slot pull rate on the Bonus tab in Drop Rates on the Gacha screen.
* If the Event Gacha is not displayed at the scheduled time, please restart the app.
* The contents of the Event Gacha are subject to change without notice.
Thank you for playing FIST OF THE NORTH STAR: LEGENDS ReVIVE.
To News List