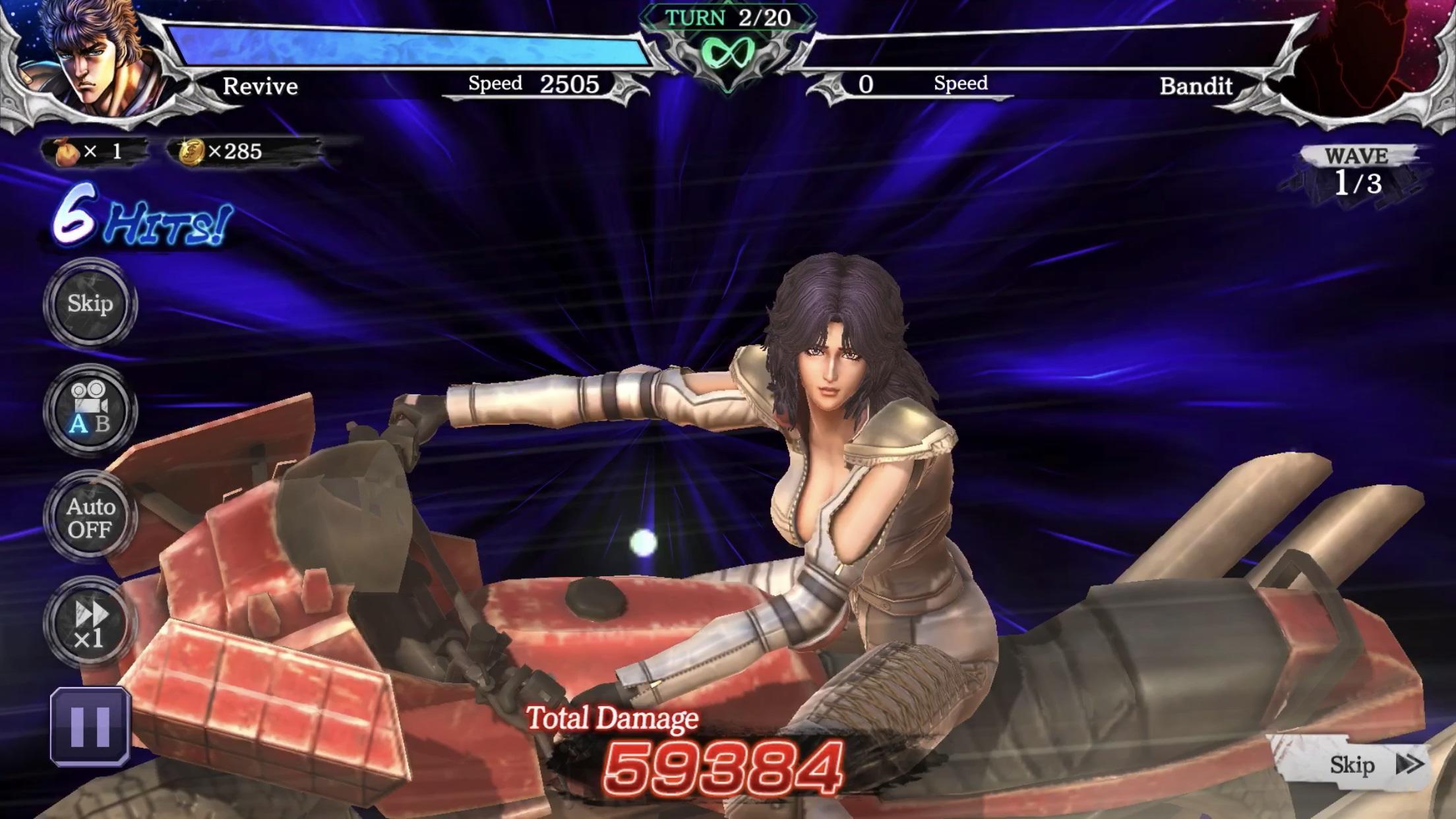 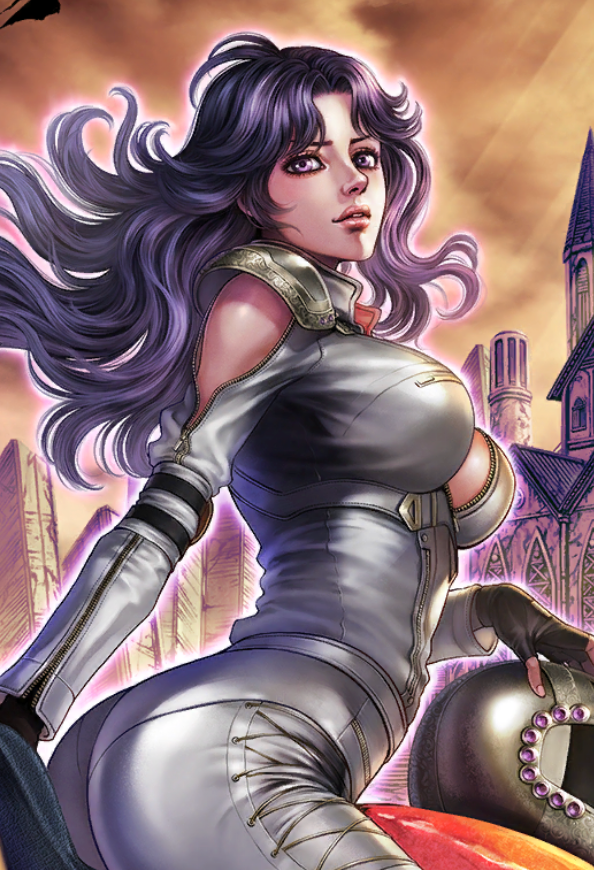 Mamiya with her bike, ready to take on the post-apocalyptic world. Hiding the physical brand and emotional scars that Juda left on her, she throws herself into battle despite being able to see the Death Omen Star. She cuts a beautiful yet sorrowful figure as she rides through the wilderness.
Desert Wildflower Mamiya is a Fighter that excels at supporting her allies. During battle, she increases the Special Tech. Activation Rate of all ally Fighters. She also gives both herself and other Technique Type ally Fighters Haste, and buffs Power Type and Life Type ally Fighters.
Additionally, she has an 80% chance to activate Skill Guard and also increases her own Critical Evasion Rate, Additional Damage Reduction and Damage Reduction, meaning she's an effective Front Row Fighter as well!
*Haste (Increases Chi Increase by 100% and ignores Chi Reduction for 2 turns. This effect is removed when the affected Fighter's Secret Technique is activated.)
Her Secret Technique damages all enemy Fighters while ignoring 20% of their Secret Tech. Dmg Reduction!
It increases the Additional Damage Reduction of ally Fighters in the Front Row, and increases the Chi of ally Fighters in the Back Row by 100.
It also has a 30% chance of granting the following buffs, based on ally Fighter Type:
Technique Type: Grants Haste (excl. herself).
Power Type: Increases Secret Tech. Dmg Increase by 15% for 2 turns.
Life Type: Grants a Shield equal to 20% of Desert Wildflower Mamiya's Max HP.
This results in ally Fighters potentially receiving buffs based on both their Row and Type!
When upgraded, her Secret Technique increases the Critical Rate of all ally Fighters and has a chance to inflict Special Tech. Seal on 2 enemy Fighters at random, meaning that Desert Wildflower Mamiya is able to both buff allies while impeding enemies!
When her Seven Stars are unlocked up to 4-stars or higher, her Passive Skill "Fiery Woman" is unlocked, which increases the Special Tech. Activation Rate of all ally Fighters during battle!
It also increases her Damage Reduction by 30%, her Critical Evasion Rate and Additional Damage Reduction by 40%, and increases her Critical Evasion Rate and Damage Reduction by 10% for every enemy Fighter on the field!
Additionally, it has an 80% chance to activate Skill Guard and reduce damage received by 60%, making her effective at tanking even in the Front Row.
If her Skill Guard activates, Desert Wildflower Mamiya's Damage Increase is increased by 3% for 2 turns (Stackable).
Her Damage Reduction is reduced by 3% and her Critical Evasion Rate is reduced by 10% (Stackable).
Her Chi is increased by 80.
If her HP reaches 50% or less, she recovers 80% of her Max HP and gains a Shield equal to 100% of her Max HP and Haste, helping her to remain on the field and continue buffing ally Fighters for longer!
If defeated in battle, recovers the HP of all ally Fighters (excl. herself) by an amount equal to 40% of each of their respective Max HP, increases their Chi by 400, and ignores Chi Reduction for 1 turn, helping to to turn the tide of battle when all seems lost!
Her Special Technique damages a single enemy and has a 70% chance to inflict Stun, which immobilizes them for 1 turn!
Additionally, she gains Haste when her Special Technique is activated on an even turn. The combination of the Special Tech. Activation Rate increase from her Passive Skill and the increased Chi Increase from Haste results in her being able to buff the entire Party more often!
Desert Wildflower Mamiya has high endurance, can buff allies with Haste and Chi increases and impede enemies with Stun, making her effective at both supporting and tanking for the Party!
Warnings
* You can check the drop rates and contents of the Gacha in Drop Rates on the Gacha screen.
* You can check the Bonus Slot pull rate on the Bonus tab in Drop Rates on the Gacha screen.
* If the Event Gacha is not displayed at the scheduled time, please restart the app.
* The contents of the Event Gacha are subject to change without notice.
Thank you for playing FIST OF THE NORTH STAR: LEGENDS ReVIVE.
To News List