We hope you are enjoying playing FIST OF THE NORTH STAR: LEGENDS ReVIVE.
The First General and supreme ruler of the barbaric Land of Shura, and Raoh and Toki's older brother, UR Kaioh returns!
Event Gacha Kaioh is underway! 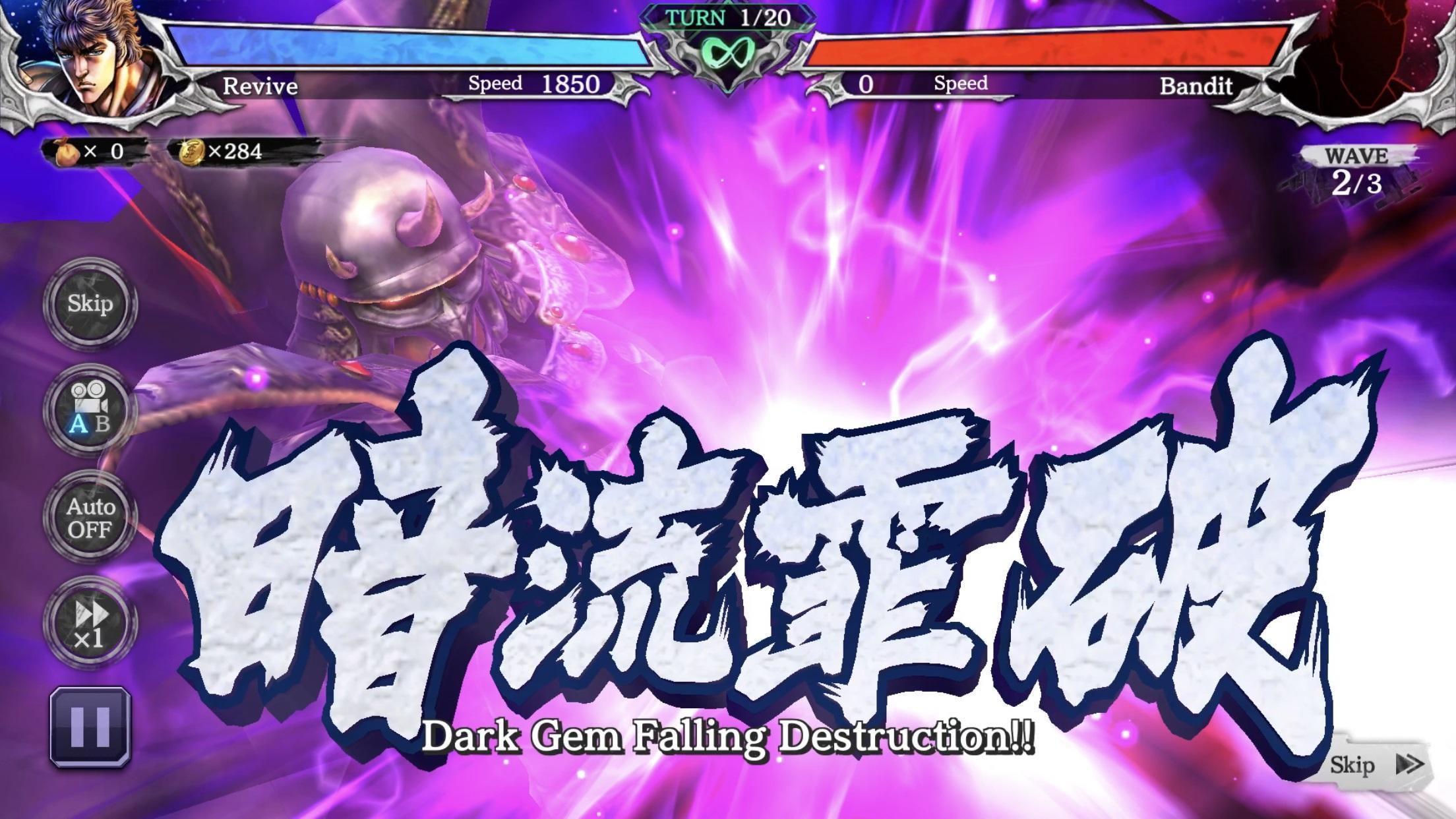 ■ Schedule
February 4, 2021 (Thu) at 20:00 UTC - February 12, 2021 (Fri) at 19:59 UTC.
■ Event Details
The Event Gacha that is currently underway features UR Kaioh.
Each time you pull from this Gacha you will receive 6 Items. You can pull for free once per day.
Furthermore, there is a certain chance to pull a bonus slot. Get certain Fighters, such as UR Kaioh, from the bonus slot.
On top of this, depending on the number of pulls you make in the Event Gacha, get glorious Rewards such as 4-star UR Kaioh and (All) Fighter Shards from the Event Gacha Bonus that is underway at the same time.
■ Kaioh 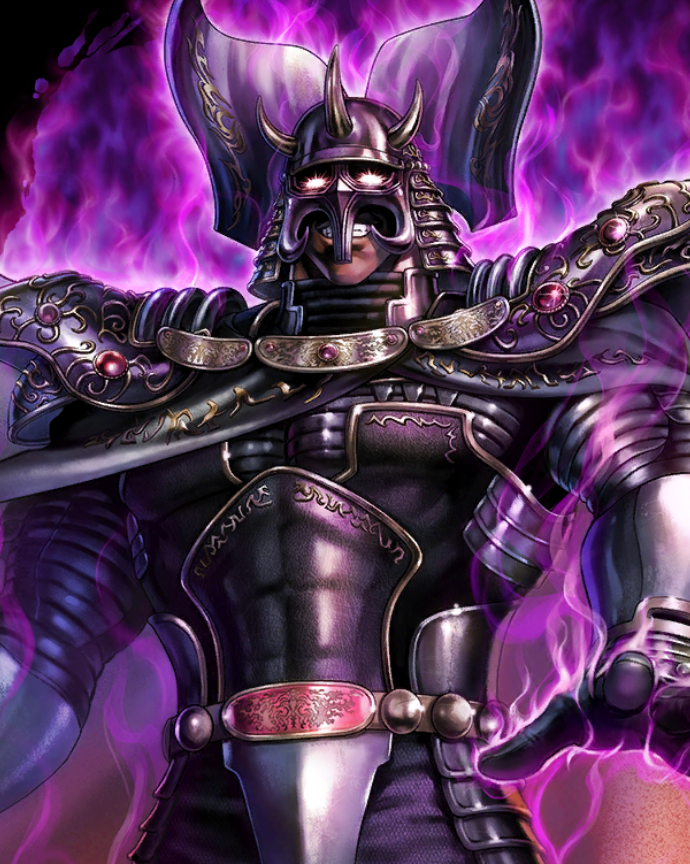 The First General and supreme ruler of the barbaric Land of Shura, he is Raoh and Toki's older brother. His use of Hokuto Ryuken has turned him into a demon. Wearing a special armor that barely contains his Demonic Chi Aura, he confronts Kenshiro.
Kaioh can use Demonic Chi Aura (a special Shield) which greatly increases his Damage Reduction. Additionally, his Secret Technique deals damage to all enemies and can inflict powerful Status Effects, making him a Fighter good at offense, defense and debufs.
When his Seven Stars are unlocked up to 4-stars or higher, his Passive Skill "Demonic Phantasm" is unlocked,
which gives him Demonic Chi Aura (When attacked, the Demonic Chi Aura takes damage instead of his HP. As long as Kaioh has Demonic Chi Aura, it increases his Damage Increase and Damage Reduction by 40%. Upon receiving damage, it increases his Chi by 150, excluding damage received at the beginning of a turn or from Damage Reflection. If he has a Shield, it will be lost upon gaining Demonic Chi Aura. As long as he has Demonic Chi Aura, he cannot gain a Shield. If he gains Demonic Chi Aura when he already has it, this amount is added to the existing one up to a maximum amount equal to his Max HP. Demonic Chi Aura is treated as a Shield by attacks with Shield-targeting/damaging properties. This effect is not affected by buff removal) upon entering battle.
Increases his Secret Technique Damage Resistance and Special Technique Damage Resistance up to 40% depending on the amount of Chi he has!
Upon entering battle, if 2 or more ally Fighters are in the Party (incl. himself), increases his Damage Reduction, Secret Tech. Dmg Reduction and Special Tech. Dmg Reduction for 3 turns and increases his Crit. Dmg Reduction by 15% at the beginning of every turn (Max 60%) making him well suited to holding the frontline in battle!
Additionally, increases Kaioh's Attack Power and Damage Increase by 30% at the beginning of his 4th turn and, if he has Demonic Chi Aura at the beginning of the enemy's turn, increases his Chi by 150 and reduces the Chi of the enemy Fighter with the highest Chi by 200, making him adept at interfering with their Secret Technique!
Also, if Kaioh's Chi becomes 1000 after receiving damage (excluding damage received at the beginning of a turn or from Damage Reflection), he ignores Chi Reduction for 1 turn (This effect can activate up to four times per battle), making it easier for him to unleash his Secret Technique!
In addition to this, if his current HP is 50% or less, Status Effects (Excluding Groggy and Devil Rebirth's Silence when they appear as a Boss in Quests.) are removed from him, making him a staunch defender.
His Secret Technique attacks a single enemy and ignores 40% of their Damage Reduction while also dealing additional damage equal to 20% of his Max HP.
Additionally, it deals 50% damage to all enemy Fighters other than the target and inflicts Anryu Hiha Field (Reduces Critical Rate by 30% and Chi Increase by 25% for 1 turn. Cannot be removed.) on all enemy Fighters!
If his Secret Technique is activated before his 2nd turn, he gains Demonic Chi Aura equal to 25% of his Max HP and all enemy Fighters' Chi is reduced by 100, making him well-suited to running interference as well as offense.
Kaioh's Special Technique damages the enemy with the lowest current HP percentage and deals additional damage to the target equal to 20% of HP they lost, making it effective for landing that finishing blow!
It also increases Kaioh's Crit. Dmg Reduction and Special Tech. Activation Rate by 20% for 2 turns and increases his Chi by 150! On top of this, if his HP is 50% or less when his Special Technique is activated, his Chi is increased by an additional 150!
With a Unique Passive Skill that buffs his defense and a Secret Technique that combines a powerful attack with debuffs, Kaioh is an excellent Fighter with high defense that can be used for both offense and running interference.
Warnings
*You can check the drop rates and contents of the Gacha in Drop Rates on the Gacha screen.
*You can check the Bonus Slot pull rate on the Bonus tab in Drop Rates on the Gacha screen.
*If the Event Gacha is not displayed at the scheduled time, please restart the app.
*The contents of the Event Gacha are subject to change without notice.
Thank you for playing FIST OF THE NORTH STAR: LEGENDS ReVIVE.
To News List