We hope you are enjoying playing FIST OF THE NORTH STAR: LEGENDS ReVIVE.
A colonel in the French Army's Intelligence Service and practitioner of Hokuto Sonkaken, UR Charles de Guise joins the battle!
Crossover Event Gacha: Charles de Guise is underway!
On top of this, get items such as Gems x100 and (UR) Fighter Shards daily from the Fist of the Blue Sky Crossover Login Bonus (Part 2) that is underway at the same time.
There's even Judollars x1,000,000 up for grabs daily, just for logging in, so be sure to log in and claim those Rewards! 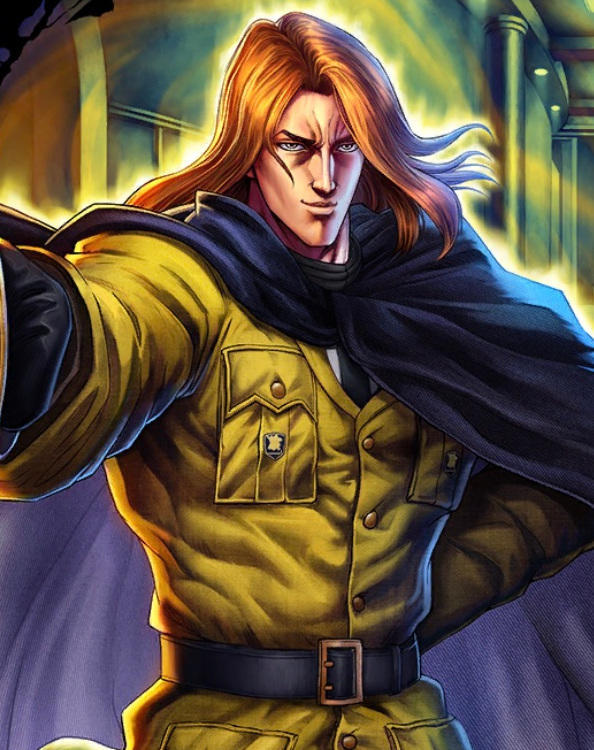 A French Jew and a colonel in the French Army's Intelligence Service. While he is a practitioner of Hokuto Sonkaken, the same as Mang Kuang-Yun (Ling Wang), he only uses it for self-defense, preferring to fight like a soldier, using a sword and pistol.
Charles de Guise's Secret Technique damages the enemy with the lowest current HP percentage and inflicts Bleed.
His Passive Skill reduces the Attack Power of all enemies during battle and, depending on the current turn, can inflict debuffs on all enemy Fighters,
or buffs on himself or ally Fighters, making him an effective Fighter in longer battles!
His Secret Technique damages the enemy with the lowest current HP percentage (Guard and Skill Guard are ineffective against this attack) and deals additional damage equal to 15% of the damage received by the target.
Additionally, it inflicts Bleed on the target twice and recovers both his own HP and that of the ally Fighter with the lowest current HP percentage by an amount equal to 15% of their respective Max HP, meaning he can deal continuous damage to an enemy while also healing both himself and an ally at the same time!
If his Secret Technique is upgraded, it prioritizes enemies in the Back Row with the lowest current HP percentage, making it useful in finishing off weakened enemies in the Back Row!
His Special Technique deals damage to a single enemy, prioritizing enemy Fighters he has struck with his Secret Technique during the same turn.
This results in him being able to deliver another blow, potentially defeating the same enemy with the lowest current HP percentage that he previously targeted with his Secret Technique!
It also increases his Status Effect Resist Rate by 60% and ignores Chi Reduction for 1 turn.
Additionally, it recovers his own Max HP by 20%, increases his own Chi and that of one ally Fighter at random (not incl. himself) by 200 and reduces the target's Chi by 200, making him good at avoiding enemy attacks with Status Effects, healing himself, and interfering with their Secret Techniques while making it easier for an ally Fighter to activate theirs!
When his Seven Stars are unlocked up to 4-stars or higher, his Passive Skill "Manipulator of Martial Artists" is unlocked which reduces the Attack Power of all enemies during battle and increases his Damage Reduction by 40%. It also increases the Damage Reduction of all ally Fighters by 15% and reduces the Damage Increase of all enemy Fighters by 15% for 2 turns making him good at mitigating damage from the enemy!
It also increases his Damage Reflection by 40%!
If his current HP is 60% or less, it increases his Damage Reflection by 10%, increases his Critical Rate, Crit. Dmg Increase and Status Effect Resist Rate by 30% and recovers 100% of his Max HP (up to twice per battle)!
Additionally, when he receives damage, not including damage received at the beginning of a turn or from Damage Reflection, he gains a Shield equal to 20% of his Max HP (up to twice per turn), making him a durable Fighter!
His Special and Secret Techniques, combined with his Damage Reflection, allow Charles de Guise to focus his attacks on weaker enemies. Coupled with his ability to debuff enemies or buff allies depending on the turn, these make him a Fighter well-suited for long battles!
Warnings
*You can check the drop rates and contents of the Gacha in Drop Rates on the Gacha screen.
*You can check the Bonus Slot pull rate on the Bonus tab in Drop Rates on the Gacha screen.
*If the Event Gacha is not displayed at the scheduled time, please restart the app.
*The contents of the Event Gacha are subject to change without notice.
Thank you for playing FIST OF THE NORTH STAR: LEGENDS ReVIVE.
To News List